Robert Louis Stevenson was born in Edinburgh in 1850. Handicapped from youth by delicate health, he struggled all his life against tuberculosis. He studied law and was admitted to the bar in 1875, but he never practiced. At an early age he had begun to write, and gradually he devoted himself to literature. The essays that were later published as Virginibus Puerisque (1881) and Familiar Studies of Men and Books (1882) began to appear in the Cornhill Magazine in 1876; he was soon contributing to periodicals such famous stories as “A Lodging for the Night” and “The Sire de Malétroit’s Door” and the tales later published as New Arabian Nights (1882). An Inland Voyage (1878), an account of a canoe trip in Belgium and France, was his first published book.
In 1880 Stevenson married Frances Osbourne, an American divorcée ten years his senior. With W. E. Henley he wrote four plays, only moderately successful. His first popular books were Treasure Island (1883), a swashbuckling adventure story of a search for Captain Kidd’s buried treasure, and the fantasy Prince Otto (1885). A Child’s Garden of Verses appeared in 1885, followed in 1886 by two of his best-known works: Kidnapped, an adventure tale noted for its Scottish setting, and The Strange Case of Dr. Jekyll and Mr. Hyde, a science-fiction thriller with moral overtones.
Constantly in search of climates favorable to his health, Stevenson went in 1887 to Saranac Lake in New York, where he began The Master of Ballantrae (1889). In 1889 he and his family set out for the South Seas, settling on the island of Upolu in what is now Western Samoa. There Stevenson gained the affection of the natives, who knew him as Tusitala (teller of tales). At his estate there (“Vailima”) he collaborated with his stepson, Lloyd Osbourne, on the novels The Wrong Box (1889), The Wrecker (1892), and The Ebb Tide (1894), and wrote and planned numerous tales and essays. He died in Samoa and, by his own request, was buried high on Mt. Vaea “under the wide and starry sky,” which he described in his famous poem “Requiem.”
Among Stevenson’s other published works are Travels with a Donkey in the Cévennes (1879); The Merry Men (1887); The Black Arrow (1888), a novel; A Footnote to History (1893), a defense of Father Damien; and a novel, The Weir of Hermiston (1896), which, although uncompleted, contains some of Stevenson’s finest writing. Stevenson’s reputation suffered severely after his death—he was considered an overly mannered writer of children’s stories. However, by the mid-20th cent. he was again regarded as a writer of power and originality with a strong moral vision. 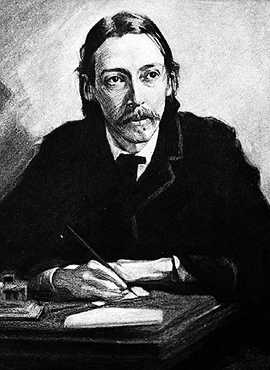