Patricia Collins Wrede was born in Chicago, Illinois and is the eldest of five children. She started writing in seventh grade. She attended Carleton College in Minnesota, where she majored in Biology and managed to avoid taking any English courses at all. She began work on her first novel, Shadow Magic, just after graduating from college in 1974. She finished it five years later and started her second book at once, having become permanently hooked on writing by this time.
Patricia received her M.B.A. from the University of Minnesota in 1977.
She worked for several years as a financial analyst and accountant, first with the Minnesota Hospital Association, then with B. Dalton Booksellers, and finally at the Dayton Hudson Corporation headquarters.
Patricia finished her first novel in late 1978. In January, 1980, Pamela Dean, Emma Bull, Will Shetterly, Steven Brust, Nate Bucklin, and Patricia Wrede -- all, at that point, hopeful but unpublished -- formed the writer's group that later became known as "The Scribblies." In April of 1980, Patricia's first novel sold to Ace Books. It came out at last in 1982, which is the year she met Lillian Stewart Carl (who introduced her to Lois McMaster Bujold by mail).
In 1985, shortly before the publication of her fifth book, she left the world of the gainfully employed to try winging it on her own.
Her interests include sewing, embroidery, desultory attempts at gardening, chocolate, not mowing the lawn, High Tea, and, of course, reading. She is a vegetarian, and currently lives in Minneapolis, Minnesota with her cats, Merlin, Brisen, and Nimue. She has no children, but as of this writing, she does have four nieces and four nephews ranging in age from seven months to twelve years old and in geographical location from Maine to Alabama.
She has published twelve and a half books. 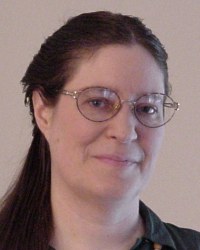