Madeleine L’Engle was born in New York City on November 29, 1918. She lived there for twelve more years. Her father, Charles Wadsworth Camp, was a writer. Her mother, Madeleine Hall Barnett Camp, was a concert pianist. Her house was filled with artists who were family friends. There are numerous possible influences for her career as a successful novelist, poet, essayist, and play write. Her writing delights children, young adults, and adults alike.
As a young woman, her life was filled with travels to Europe which also included Swiss boarding school. She continued her academics and graduated from Smith College in 1941. Her years after graduation included living with friends in New York where she wrote and looked for acting jobs. It was during this time that her first book, The Small Rain, was published. Then she met her future husband actor Hugh Franklin. They both retired from the theater to move to the country.
Despite helping to build up and manage a general store, run a large farmhouse, and raising three small children, L’Engle still found time to write. Even though she was not able to sell her writing during this time, she continued to write as a part of living, a source of happiness.
After conquering the local economy - successfully operating their store, they wanted to get back to the city and theater. So they moved back to New York City. Hugh Franklin went on to star on the soap opera All My Children. He died in the fall of 1986 after a long illness.
Madeleine L’Engle is currently writer-in-residence and librarian at the Cathedral of St. John the Divine in New York City. She now enjoys spending time with her three children and grandchildren. She divides her time between New York City and her country home in Connecticut 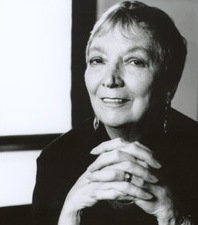