Louisa May Alcott, the second daughter of Amos Bronson Alcott and Abigail "Abba" May was born in Germantown, Pennsylvania on November 29, 1832. At an early age, Louisa and her family moved to Boston, Massachusetts where her father pursued his teaching career by setting up the Temple School. Bronson Alcott was well known for his controversial teaching methods which relied more on student involvement and a belief that children should enjoy learning. In 1840 the family moved to Concord where prominent American author and close friend of the Alcott's, Ralph Waldo Emerson, helped the family to set up residence. Louisa enjoyed the county atmosphere of Concord and found her time divided between acting out plays with her sisters which she had written, and nature walks with Henry David Thoreau. In 1843 the Alcott family took part in an experimental communal village known as the Fruitlands. Here Bronson Alcott wished to further his beliefs in transcendentalism and bring his daughters a greater understanding of nature. Unfortunately the project failed and the family returned to Concord in 1845 taking up residence at Hillside.
Unable to guarantee his family a steady income, Bronson moved the Alcotts back to Boston in 1849. At this point, Louisa began to feel more and more responsible for her family's financial needs and started taking on as many jobs as a young girl could find. She began reading for an elderly father and his invalid sister, but this eventually turned sour when Louisa received next to nothing for her work. At the same time, Louisa and her sister Anna took to teaching small children and mended and washed laundry in an effort to help provide for the growing Alcott family. In 1852 Louisa's first poem, "Sunlight" was published in Peterson's magazine under the pseudonym, Flora Fairfield. Although modest payment was received, Louisa was beginning a career that would bring her great fame and end her financial worries.
Three years later, in 1855, her first book, Flower Fables was published. At this point, the Alcott family moved to Walpole, New Hampshire but Louisa stayed on in Boston to further her literary career. Tragedy struck the family in 1856 when the third daughter, Lizzie, contracted scarlet fever. Lizzie would recover for the time being but her illness forced the Alcott's back to Concord where Emerson purchased Orchard House for the family. Lizzie's sickness returned and she passed away on March 14. Yet happiness was soon to follow as Anna, the oldest announced that she was to be married. Anna's wedding and Lizzie's death forced Louisa to return to Concord house in 1857. She wished to help comfort her mother during this time and try to help alleviate the lose of two daughters.
Louisa saw that her loving heart was need by more than just her family and she headed for Washington, DC. in 1862 to serve as a Civil War Nurse. Like many other nurses, Louisa contracted typhoid fever and although she recovered, she would suffer the poisoning effects of mercury (the doctors at the time had used calomel, a drug laden with mercury to cure typhoid) for the rest of her life. Her stay in Washington prompted Louisa to write Hospital Sketches which was published in 1863 followed by Moods in 1864. At this point Louisa's publisher, Thomas Niles, told her that he wanted "a girls story" from her. Having spent her life with three of the most interesting girls, Louisa wrote furiously for two and a half months and produced Little Women based on her own experiences growing up as a young women with three other sisters. The novel, published September 30, 1868, was an instant success and sold more than 2,000 copies immediately. In fact the country was so taken with Louisa's story that her publisher begged for a second volume. April 14, 1869 saw the release of the second volume with a response of more than 13,000 copies being sold immediately. Alcott's story of Meg, Jo, Beth, and Amy had launched her into stardom and helped to alleviate the family's financial problems. Louisa followed up her success with Old Fashioned Girl in 1870.
Needing a break, Louisa and her youngest sister May headed off to Europe in 1870. The next few years, however, saw Alcott's career grow and grow as book after book was published and enjoyed by a huge audience of young readers. Little Men was published in 1871 followed by Work in 1873, Eight Cousins in 1874, and Rose in Bloom in 1876. During this time, Alcott became active in the women's suffrage movement, writing for "The Woman's Journal" and canvassing door to door trying to encourage women to register to vote. In 1879 Alcott became the first woman in Concord to register to vote in the village's school committee election. Unfortunately, Abba's health was failing and she passed in November of 1877.
Yet sorrow was not to last long in the Alcott family as May announced her marriage to a wealthy European in 1878. May gave birth the following year, November 8, 1879 to Louisa May Nieriker. Sadly complications arose, and May died December 29th of the same year. Her dying wish was for Louisa to care for her namesake, Lulu. In 1880 Lulu moved to Boston with Louisa and helped to bring joy and fulfillment to Alcott's life. In 1885 Louisa moved what remained of her family into elegant Louisburg Square, Boston. Still writing as best as she could, for the mercury poisoning she had received early in life was beginning to take its toll, Louisa published Jo's Boys in 1886. Her father's health finally failed and he passed March 4, 1888. Two days later, at the age of 56, Louisa May Alcott died in Boston, leaving a legacy in wonderful books to be admired and cherished for generations to come. 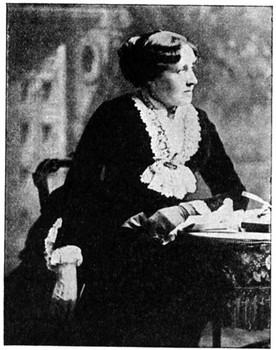