Lionel John Dillon, better known as Leo Dillon, was born in the East New York section of Brooklyn, New York, in 1933, just 11 days before his future wife and collaborator, Diane, would be born on the other side of the country. Dillon's parents, immigrants from Trinidad, encouraged his artistic talent, as did his first mentor, a friend of his father named Ralph Volman, who gave young Leo both criticism and support. Dillon trained for a commercial art career at New York City's High School of Industrial Design, and then enlisted in the U.S. Navy in order to be able to attend college on the G.I. Bill.
In 1953, on the advice of a high school teacher, Benjamin Clements, Dillon entered Parsons School of Design rather than the more commercially oriented Pratt Institute. It was at Parsons that he met Diane Sorber, a fellow student.
Artist Diane Dillon is justifiably renowned for the enormous body of work she has produced with her husband and collaborator, Leo Dillon. She was born in Glendale, California, in 1933 — just 11 days after her future husband — and grew up in Los Angeles. Her father, a schoolteacher and inventor, and her mother, a concert pianist and organist, encouraged her passion for drawing. Dillon also took inspiration from the fact that her favorite drawings, the newspaper fashion illustrations of Dorothy Hood, were created by a woman artist.
Diane Dillon studied art at Los Angeles City College, Skidmore College, and finally Parsons School of Design, where she met Leo Dillon for the first time.
The two became fierce competitors before their respect for each other's work led to friendship and love. They were married in 1957. They began collaborating artistically shortly thereafter, gradually coming up with a unique method of work they describe as emanating from "a third artist" — something neither of them could produce alone, and in which no aspect can be attributed exclusively to one or the other.
For more than 40 years now, the Dillons have produced an incredible variety of drawings and illustrations for prints, book jackets, textbooks, album covers, and of course children's books. Among their many honors, they have received two Caldecott Medals — for Ashanti to Zulu and Why Mosquitoes Buzz in People's Ears — four New York Times Best Illustrated Awards, four Boston Globe/Horn Book Awards, two Coretta Scott King Awards, two Coretta Scott King Honors, and the Society of Illustrators Gold Medal.
iane and Leo Dillon live in New York City. They have one son, Lee, who is also a talented painter, sculptor, and jewelry craftsman. 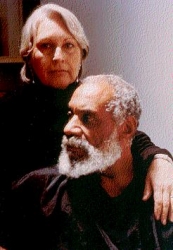