Eoin Colfer was a primary school teacher in Wexford, Ireland up until he secured the largest ever advance for a children’s novel by an unknown author in October 2000. He cast a spell on the publishing and film industries with his fantastically original novel, 'Artemis Fowl'. Eoin hasn’t looked back since and is now fast becoming one of the biggest names in children’s literature. His first novel, 'Benny and Omar' was an instant bestseller in Ireland and even knocked 'Harry Potter' off the number-one slot for bestselling children’s books. Like 'Artemis Fowl', it was written after a day’s teaching and after his young son’s bedtime.
The 'Artemis Fowl' titles have sold over half a million copies in the UK alone. 'Artemis Fowl' won the Children’s Book of the Year at the British Book Awards, the WH Smith 'People’s Choice' Children’s Book of the Year and was also shortlisted for the Whitbread Children’s Book of the Year 2001. It was nominated as one of the nation's 100 favourite books in the BBC's Big Read and has sold in 32 countries. A production of 'Artemis Fowl' the film is now underway.
'The Wish List' which is about to be published in paperback was originally published in Ireland in 2001 and went straight into the best-seller list and won the 'Bisto Merit Award' 2001. With a cast of quirky characters and a plot that twists and turns like a demon’s forked tail, 'The Wish List' will appeal to Eoin’s growing fan base. Many of the elements that make the 'Artemis Fowl' books so enjoyable can be seen in this funny and original story.
Eoin Colfer’s razor sharp wit and wonderfully accomplished style combine with his influences from the world of film (The Matrix), animation (The Simpsons) and graphic novel (Akira) to produce fast-paced, laugh-a-minute fantasy thrillers that keep you on the edge of your seat right to the very end. 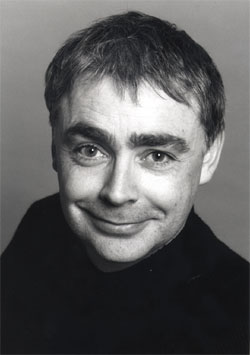