Christopher Paolini’s journey to fame began when he was fifteen. He finished high school and was accepted to a college but decided not to go right away. Instead, he set out to write a novel for his own entertainment.
Christopher tackles projects by educating himself. He read several books on the craft of writing*, and then devised a plot for the "Inheritance Trilogy", three books that would follow the adventures of Eragon, a teenage boy who is befriended by a dragon named Saphira. He spent a year writing Eragon, the first book in the trilogy, and another year editing it.
Christopher and his sister Angela developed three languages for the characters in the book, basing one on Old Norse and making up the other two. Christopher drew all the maps in the book, and illustrated the original cover.
When Christopher's parents read the book, they were astounded. As owners of a small publishing company, their high opinion of the book was based on more than just parental pride. They published Eragon, and Christopher spent months promoting it all over the Northwest U.S. He even designed a program around it that encouraged school children to read, and spent over a year presenting that program in schools all over the western U.S., starting with his neighborhood's high school.
The Paolinis had sold over 10,000 copies of the book before it was discovered by author Carl Hiassen, who showed it to his editor at the New York publishing company Alfred A. Knopf. Soon, Christopher was offered a mid-six-figure contract for the trilogy; not long after, Eragon was optioned for a movie.
Christopher's story has been featured in many major magazines, including Time, Newsweek and People, and he has also appeared on the "Today Show."
Christopher lives with his family in Paradise Valley, Montana. 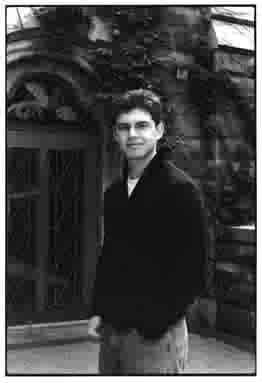