New York Times bestselling author Brian Jacques (pronounced "jakes") was born in Liverpool, England on June 15th, 1939. Along with forty percent of the population of Liverpool, his ancestral roots are in Ireland, County Cork to be exact. He grew up in the area around the Liverpool docks. His interest in adventure stories began at an early age, as he read the works of Daniel Defoe, Sir Henry Rider Haggard, Sir Arthur Conan Doyle, Sir Thomas Malory, Robert Michael Ballantyne, Robert Louis Stevenson, and Edgar Rice Burroughs. One of his favorite tales is Kenneth Graham's Wind in the Willows.
Brian attended St. John's School, an inner city school with a playground on its roof. On his first day at St. John's, at the age of ten, he had an experience that marked his potential as a writer. Given an assignment to write a story about animals, he wrote about a bird that cleaned a crocodile's teeth. The teacher could not, and would not, believe that a ten-year-old could write as Brian had. Young Brian refused to falsely say that he had copied the story, and was caned as "a liar." Rather than be unsettled by his unjust punishment, Brian realized that he had always loved to write, and that he clearly had a talent for writing.
Some teachers at St. John's proved to be good role models. As Brian recalls: "My favorite teacher was Mr. Austin Thomas. He looked like Lee Marvin. Big man. A captain in World War II. He came to school on a big push bike with the haversack on back. He was a man's man. Always fair. I was fourteen at the time when Mr. Thomas introduced the class to poetry and Greek literature. Because of him, I saved seven shillings and sixpence to buy The Iliad and The Odyssey at this dusty used book shop." This interest in poetry extended to include Wordsworth, Tennyson, and Goldsmith.
Brian Jacques is as adventurous as the heroic woodland characters that are featured in his epic novels. At age fifteen, Brian quit school, as was common in the inner city, and set out to find adventure as a merchant seaman. His travels took him to many far-away ports, including New York, San Francisco, and Yokohama. Tiring of the lonely life of a sailor, he returned to Liverpool where he worked as a longshoreman, a long-distance truck driver, a bus driver, a boxer, a bobby (Police Constable 216D), and a stand-up comic.
During the sixties, when the Beatles turned the world spotlight on Liverpool, Brian and six others, including his two brothers, formed a folksinging group known as The Liverpool Fishermen. Brian has written both poetry and music, but he began his writing career in earnest as a playwright. His stage play Brown Bitter, Wet Nellies, and Scouse was commissioned for the Everyman Theatre on the advice and encouragement of Alan Durband, a retired schoolteacher and writer of Shakespeare Made Easy. (In case you're curious, "scouse" is a slang term for someone from Liverpool, named after the cheap, nearly meatless stew that is a staple in the traditional Liverpool working man's diet.)
Brian was working as a truck driver, delivering milk to the Royal Wavertree School for the Blind in Liverpool, when he began volunteering some of his time to read to the students. The storytelling activity gave him ideas of his own, and the story that became Redwall began to take shape. Brian developed his descriptive writing style with his first audience in mind; for the blind students, he painted pictures with words, so that they could see the action in their imaginations. He continues to be a patron of the school.
His writing gained acclaim when Alan Durband read Redwall, and showed it to a publisher without telling Brian. The publisher's interest led to a contract for the first five books in the Redwall series. Since then, readers from 8 to 80 have been captivated by his swashbuckling adventure-filled series, featuring the on-going battle between the peaceful mice and creatures of Redwall and the evil rat and stoat vermin who challenge them. The Bellmaker, Brian's 1995 entry to the Redwall series, is dedicated to Mr. Durband.
Brian Jacques still lives in Liverpool. He has become a well-known radio personality, hosting his own Sunday afternoon radio show, "Jakestown," on BBC Radio Merseyside. Brian shares his comedy and wit, and plays his favorites from the world of opera (he is a veritable expert on tenors in general). He has two grown sons, both living in Liverpool. Marc, age 31, is a builder, a carpenter, and a bricklayer, and played Matthias in the recording of Redwall. David, age 33, is a professor of Art, and a muralist. His has created works for children's hospitals, soccer stadiums, and trade union offices in Germany, Mexico, and Chile.
Brian enjoys walking his dog, "Teddy," a white West Highland Terrier, completing crossword puzzles, and cooking (particularly Italian) for the weekly family dinners. When there's time he reads the works of Mario Puzo, Damon Runyon, Richard Condon, Larry McMurtry, and P.G. Wodehouse. 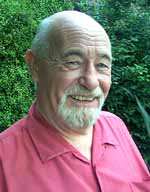